What did the ATSB report find?

The report concluded that a combination of factors led to the degradation of the track between Melbourne and Sydney which resulted in rough riding and mud-holes, issues that are currently being addressed by ARTC’s Ballast Rehabilitation Program.

No systemic issues were found by the ATSB report that might have compromised the safety of rail operations where the track quality was below standard.

The ATSB has indicated the program we are applying to the track will correct most fouled ballast and drainage problems, and ARTC will be reviewing the report to identify any further measures that might need to be considered or applied to our current program of works.

The report also found that it was unlikely that selecting an alternative method of re-sleepering to side insertion would have prevented deterioration in track condition or the development of mud-holes.

What’s ARTC’s response to the report?

What’s been achieved so far with the works underway?

Train reliability and performance along this corridor has improved significantly since the program began.

Why are there still speed restrictions?

Temporary Speed Restrictions vary all the time according to the condition of the track or wider environmental conditions (such as during times of extreme heat). ARTC manages these speed restrictions in accordance with the wider condition of the track and can manage train operations safely when they are in place. Operations can quite often still run to timetable when speed restrictions are applied with efficient track operations.

When will the track be restored to normal and how long will it take to fix?

We are now into the fourth year of the five year program and while there is still some volatility in the condition of the track, the fact we’re seeing consistent good performance from passenger and freight services means that the program is working.

Is ARTC’s work on schedule?

What will happen if we just get more heavy rain on the track?

The track is in significantly better shape than when we began the program in 2011, and we see it withstanding significant weather events far better. We think we will be able to meet our commitments and manage track speed restrictions on train operations within the existing network and track conditions.

‘Mud-holes’ develop in areas of poor drainage in the rail track ballast.

According to the Australian Transport Safety Bureau (ATSB), a mud-hole is:

“A generic term used to describe a condition where the sleepers appear to be surrounded by mud rather than ballast. Mud-holes occur when the ballast becomes contaminated (or fouled) with fine materials. This can be due to poor ballast, a breakdown of the ballast material or the formation (the track base) rising up through the ballast. The fouled ballast retains water (appears like mud), prevents effective drainage and can result in poor track geometry.”

Poor or inefficient drainage and a build-up of water results in the ballast becoming ‘fluid’ and unable to support the track properly.

Rail traffic passing over the mud-holes has the effect of pumping the sleepers and track into the trapped water in the ballast exacerbating the mud-holes and creating a ‘rough ride’ for the train.

Why are there speed restrictions?

Speed limits were applied in a number of sections along the Melbourne to Sydney track where mud-holes had been created. Speed restrictions are an internationally recognised way to ensure safe train operation along areas of track where a rough train ride is experienced.

What is wrong with the track?

Poor drainage and a build-up of water has resulted in heavy concrete sleepers, which were newly laid in 2009 and 2010, not being properly supported by the ballast.

Rail traffic passing over the mud-holes has the effect of pumping the sleepers and track into the trapped water in the ballast exacerbating the mud-holes and creating a rough ride for trains travelling through the region.

Track ballast is the small hard rocks (typically around 60mm in size) that forms the foundation for the railway track and sleepers. Ballast is laid underneath, on top, and around the sleepers. The ballast forms a stable bed to anchor the track in the desired position.

What is track resurfacing?

A ballast tamper, or track resurfacing machine, picks up and resurfaces the track by “packing” the ballast around the sleepers. This ensures the track is aligned correctly, providing a more solid foundation for the track and a smoother ride.

What is rail straightening?

During rail straightening, a rail bending machine aligns and straightens the rail where small deviations have occurred at weld points. This makes the track smooth and level, creating a more comfortable ride for trains.

What is rail welding? 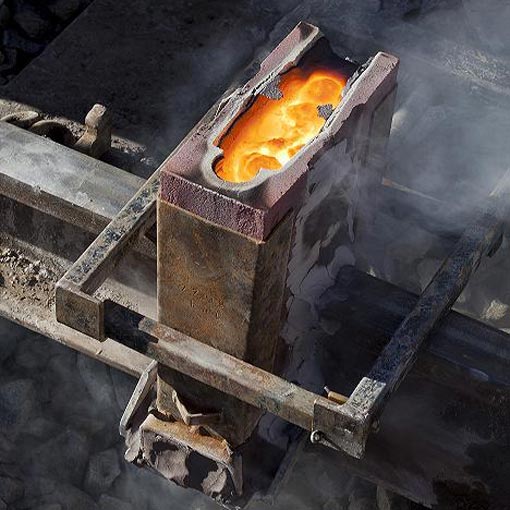 Rail welding is a process where adjoining lengths of track are permanently joined together using a variety of techniques, all of which are characterised by using molten metal at temperatures in excess of 1100 degrees Celsius.

What is ballast sledding?

Ballast sledding is a technique that involves lifting up the entire rail and sleepers and then displacing fouled ballast creating a new drainage path underneath the sleepers and track. Sledded sections of track then have new ballast placed on them and are “resurfaced” back to their design alignment.

What is shoulder ballast cleaning?

Shoulder Ballast cleaning involves removing and cleaning the ballast which is on the “shoulder” of the track – not directly under the sleepers. The cleaned ballast is returned to the track and additional ballast introduced to return the track to its design profile. At the completion of the process, track resurfacing also occurs. This allows water to drain from the centre of the track.

What is track undercutting? 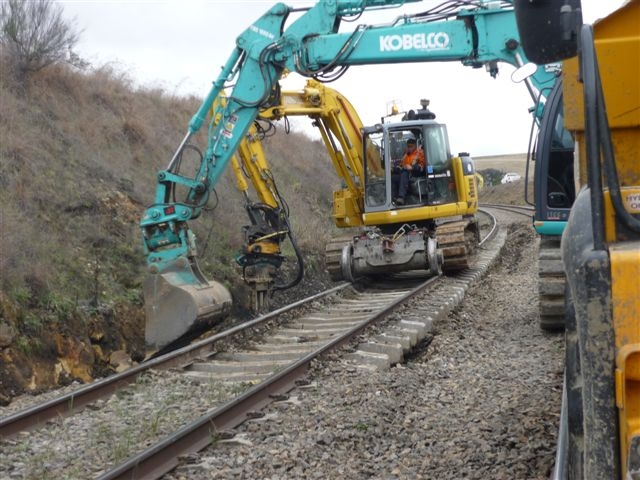 The ballast underneath the track can also be removed with an undercutter, a machine which travels along the track and removes the ballast without removing the track or sleepers. This improves drainage and eliminates fouled ballast.

What is rail grinding?

Heavy rail grinding removes flaws in the rail surface which can contribute to the creation of “mud-holes”. The rail grinding re-profiles the surface of the rail so there is an even interface between the rail and wheel of the train, which helps make for a smoother ride for trains.