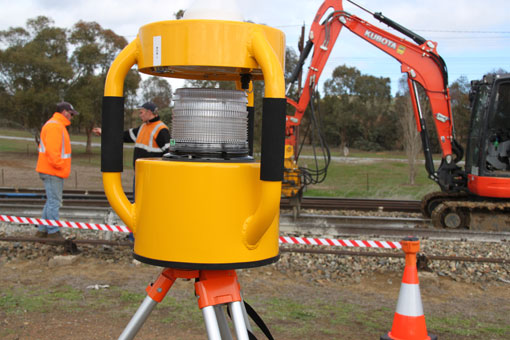 Comprised of a beacon and a tripod, the TASS pinpoints train movements using GPS and NextG technology* and when locomotives reach a certain distance from track workers they are alerted via a siren and flashing lights.

“Trains can take well over a kilometre to come to a stop, so having an additional layer of safety that ensures track workers are clear of a work site when a train is passing through can only be a positive move,” ARTC Executive General Manager Technical Services, Mike van de Worp said.

Weighing in at less than ten kilograms, the beacons have been designed to be robust, portable, quick to setup and easy to use.

“The mobility of the system and the reach of ARTC’s national train radio network ensures our maintenance teams can easily deploy the TASS system in the remote corners of Australia that we work, including along the Nullarbor and the far west of the NSW outback.”

TASS has been undergoing a four-month live field trial at locations across NSW since June, including the North Coast, Hunter Valley and Main Southern Line toward Melbourne.

“It’s appropriate that we get to show-off TASS during National Rail Safety Week – a system that will be of great benefit to our staff and promotes our safety goal that no-one is harmed at work or on our network,” Mr van de Worp said.

“It seems a simple device, but a lot of planning and hard work has gone into the design and development of TASS and the software behind it, and like the iPhone it is this simplicity which makes it so brilliant.”

The TASS units cost around $5,000 each to produce and the system is designed to complement existing rail safety rules and procedures.

Railway safety remains one of the industry’s highest safety priorities with Australia’s rail network being the sixth largest in the world, with 44,000km of track and 23,500 level crossings.

On this network there are a reported 5,000 trespass incidents, 70 level crossing collisions, around 180 fatalities and thousands of near misses every year, all are a direct result of taking risks and disobeying the rules around railway lines and level crossings.

It can take a fully-loaded freight train up to two kilometres to stop and they can’t swerve to miss a vehicle on the tracks.

The message for this year’s Rail Safety Week is ‘Train yourself’ aiming to reinforce the fact that the onus is on the individual to always obey the rules around railway lines and STOP, LOOK, LISTEN, THINK.

*TASS uses the Telstra NextG network for data connections and GPS reports from in-cab train digital radios to detect the location of trains and transmit them to the beacons when trains are approaching.