Thanks to some valuable local advice, the future breeding success of a pair of Northern Rivers Ospreys has been confirmed despite extensive steel refurbishment works to the bird’s home, the Urunga Railway Bridge near Coffs Harbour.

A photo taken last week of the Osprey’s feeding their young at the bridge has confirmed the home and nest has been successfully re-established.

The Ospreys, well known to local birdwatchers, have been raising young at the bridge for more than a decade; however in 2012 the 90-year-old bridge required a significant steelwork upgrade to ensure it would remain safe for rail operations for years to come.

ARTC called in the help of local Northern Rivers Osprey management expert, Bob Moffatt, to assist with the movement of the birds along the bridge and to balance maintenance works around the Osprey’s breeding season.

On advice from Bob, the best approach for moving the Ospreys during the works involved wrapping the existing nest in industrial cling wrap, to keep it intact, before manoeuvring it onto a specially constructed nest cradle.

The cradle and nest, minus the cling wrap, were placed at the opposite end of the bridge during the maintenance, and then returned to its original position once works were completed to the first half of the bridge.

The birds returned and refurbished their nest following completion of the works in 2012, but it seems they may not have attempted breeding that year.

“The Osprey’s usually breed and lay their eggs during the autumn and winter months,” Mr Moffatt said.

“Osprey’s are generally faithful to their nest site and unless they find a better spot elsewhere, they will return, do a bit of renovation on the nest and lay their eggs.”

“The confirmation of the young last week confirms the relocation has come full circle and the birds are able to raise a family once again, a win for local birdwatchers and ARTC, but most important of all – the Ospreys,” Bob said.

“It shows what can be achieved with some sound planning and consideration of the environment when undertaking necessary rail maintenance. The outcome is we continue to ensure the future of a very special pair of local birds.” 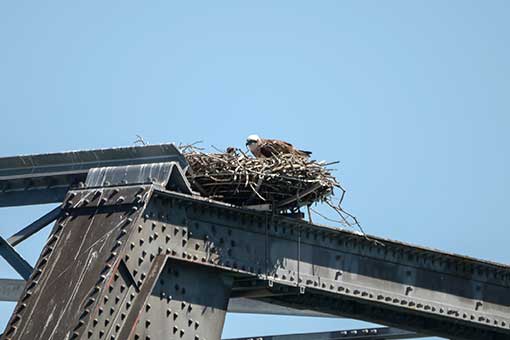