Australian Rail Track Corporation is today releasing the results of the first stage of the Melbourne-Brisbane Inland Rail Alignment Study.

The Australian Government announced the study in March 2008 to determine the economic benefits and likely commercial success of a new standard gauge inland railway between Melbourne and Brisbane along with the potential optimum alignment. It will provide the Government and private sector with information that will help guide future investment decisions, including likely demand and an estimated construction cost.

The first stage of the study has been focused on preliminary evaluations of likely demand, capital costs and operating costs to determine a route for further detailed analysis.

After examining more than 50 options, the finding of ARTC’s study is that the railway should follow existing rail lines from Melbourne via Albury to Cootamundra, Parkes, Narromine, Dubbo, Werris Creek and Moree to North Star near Goondiwindi; with new construction from North Star to Brisbane via Toowoomba. North of Parkes the railway would require the upgrading of parts of the existing route, including minor deviations to improve its alignment.

Some sections of the route will be finalised in later stages of the study, including between Junee and Stockinbingal; a possible route from Premer to Emerald Hill avoiding Werris Creek; North Star to Yelarbon near Inglewood; and in the vicinity of Toowoomba.

The route for further analysis is shown on the attached map which also shows the sections to be finalised.

Assessment of the proposed railway’s financial and economic performance is at an early stage. Work in Stage 1 was aimed at providing sufficient information for selection of the route. The route chosen for further analysis has the lowest overall capital cost. All options considered in a preliminary forward assessment do not appear to be financially, or economically, viable.

The cost of the project is driven largely by the difficult terrain from Toowoomba towards Brisbane. The capital cost of the route to be further analysed at its lowest preliminary estimate ranges from $2.8 billion to $3.6 billion.

The study is being carried out for the Government by the Australian Rail Track Corporation. The five working papers produced in Stage 1 of the study have been placed on ARTC’s website. The working papers can be found at http://www.artc.com.au/Content.aspx?p=175

The five working papers are listed below.

Comments on the working papers are invited, and will be taken into account in future stages of the study.

The next stages of the study will involve more engineering, environmental and land baseline analysis of the route together with further financial and economic work. This will include:

Stage 2 results are expected in the third quarter of 2009. The final stage, to be completed by the end of the year, will include development of the preferred alignment, further financial and economic analysis and identification of delivery strategies. 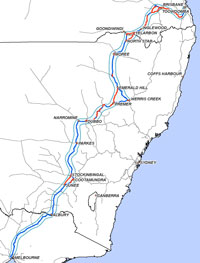 The objectives of the study are to determine:

In developing the detailed alignment for the route, ARTC will generally follow the ‘far western sub-corridor’ identified by the North-South Rail Corridor Study.

The study is to be carried out in three stages, with a review of progress and direction at the end of each stage.

Proposed stages are as follows:

Each of the stages will represent a milestone for the project as a whole. The progress of the study will be reviewed in detail at the end of each stage. Progress to the following stage will be dependent on satisfactory outcomes for the study to date.

Within each stage there will be a series of working papers produced to document the progress of the study. The ARTC will consult with key interested parties during the study.